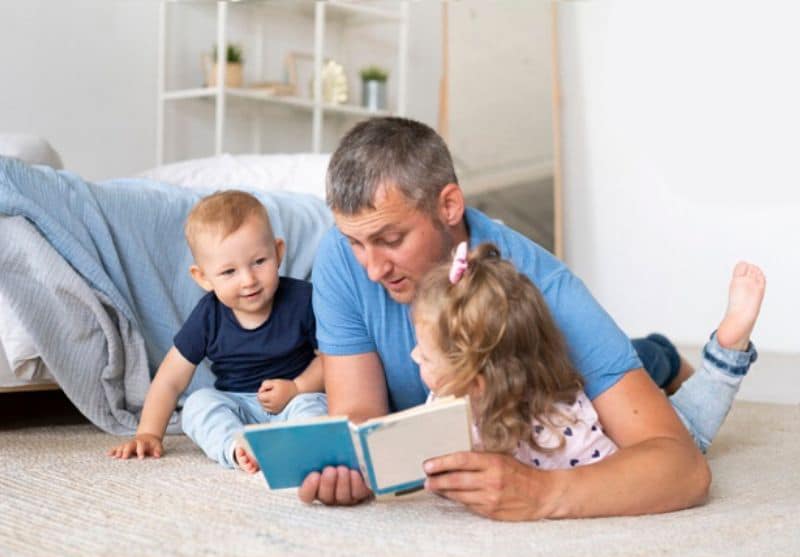 „Мy Dad”
Summer. She runs barefoot through the yard. Curly hair still disheveled falls down her shoulders. He is two years old and countless questions he does not know how to ask his mother and grandmother, with whom he lives in a small house whose roof is leaking. Her greatest wealth is a smile as she talks to the dog, to whom she awkwardly says: “Come Dragana, come!” He doesn’t answer her, and she persistently tries to get words from him. Her mother is not often at home, because she works from morning to evening. It is the grandmother who takes care of her or maybe she takes care of the grandmother, because the years are many and the arms and legs are weaker.
The door opens and a mother and a man enter the house. She shyly enters her grandmother’s arms and hides her gaze. “How are you?” Her mother asks. Does not match. The conversation was between a stranger and a grandmother.
Countless questions about who he is, where he is from … Dragana asks the same questions in her head.
The man took the chocolate out of his pocket and handed it to the shy princess, who approached slowly, took her reward for bravery, and sat down next to her mother. He opens the chocolate, separates the cube, and hands it to the stranger, saying, “Take it, Dad.”
He looked at her in astonishment, took her in his lap and began the conversation. Jelena, my house is not big, if you want, come live with me. After a month, she was at the wedding and beautified her mother’s hands like a bouquet of flowers. She got a father, and then a brother and a sister. She grew happily because she was loved. She and her father often spent time together.
He taught her how to fish, how to play football, how to become a good person. Time passed, she grew into a girl and she had to go to study. She lacked college documents. She went to the Registry Office to get her birth certificate. The registrar searched for her information for a long time, and then told her: “Dragana, we have a problem, you do not have your father’s name entered, there was probably an error in the registration after the birth.
Dragana was speechless, tears streaming down her face.
She returned home, but it was no longer the princess from the beginning of the story. She withdrew, and then one day she asked her mother, “Why don’t I have my father’s name in the documents?”
Mom fell silent, shrugged and said, “Isn’t it good where we are, are you missing something?”
She didn’t answer, she went to “Daddy”, hugged him and kept quiet. They both cried, and she loved him even more, because next to her was her hero, someone who gave her love unconditionally, even though he didn’t give her life.