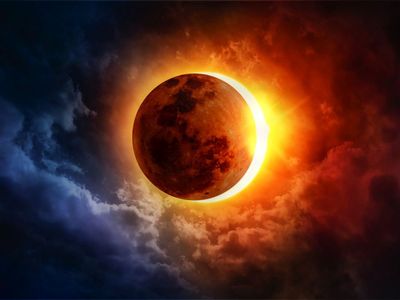 Natural phenomena often lead us to the question of what it would be like to live on planet Earth if everything were not as perfect as it is, and then the Moon and Sun appear and play their game of nature and offer us surprises in which we see how rich we are, because we have sunlight that sustains us.

A solar eclipse occurs when the Moon is intercepted between the Sun and the Earth, and partially or completely obscures the Sun. The moon is then in the new moon phase and people say that it is good to take a wallet, put a few coins in it and point it towards the sky, because then there will be enough money.

Solar eclipses can be complete, annular, partial, and hybrid. Different types of eclipses occur because the path of the Moon is elliptical. When the Moon is further away, it does not obscure the entire solar disk and an annular eclipse is observed, and when the Moon is closer, it can completely obscure the Sun and a total eclipse occurs.

The lunar eclipse occurs when the Moon enters the Earth’s shadow, it can be seen from the entire Earth’s hemisphere, and the Moon is a perfect work of art, because it is illuminated by a dark red light scattered passing through the Earth’s atmosphere.

A total solar eclipse at some point on the Earth’s surface occurs on average every 400 years. The last total solar eclipse, visible from the Balkans, happened on February 15, 1961, when I was not even born, and the next one will happen on September 3, 2081, which means that I should live 113 years, and that is not impossible. so I will rejoice and be optimistic, and you will do the same.
Dijana Uherek Stevanović,