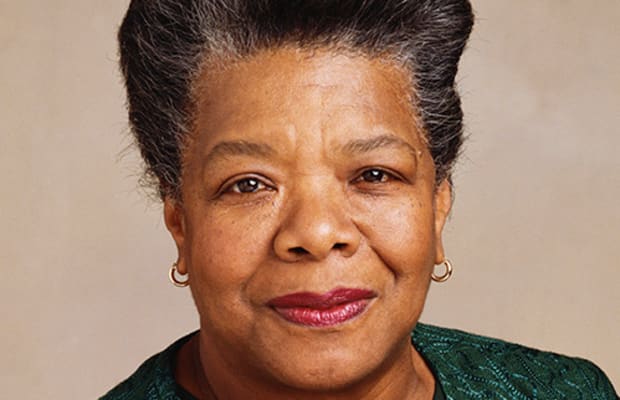 “You may not control all the events that happen to you, but you can decide not to be reduced by them.”

Early life and other experiences –

Angelou was born on April 4, 1928, in St. Louis, Missouri. Angelou had a difficult childhood. Her parents split up when she was very young, and she and her older brother, Bailey, were sent to live with their father’s mother, Anne Henderson, in Stamps, Arkansas. As an African American, Angelou experienced first-hand racial prejudices and discrimination in Arkansas. She also suffered at the hands of a family associate around the age of 7: During a visit with her mother, Angelou was raped by her mother’s boyfriend. As vengeance for the sexual assault, Angelou’s uncles killed the boyfriend. So traumatised by the experience, Angelou stopped talking. She returned to Arkansas and spent years as a virtual mute.

During World War II, Angelou moved to San Francisco, California. There she won a scholarship to study dance and acting at the California Labor School. Also, during this time, Angelou became the first Black female cable car conductor — a job she held only briefly — in San Francisco. In the mid-1950s, Angelou’s career as a performer began to take off. She landed a role in a touring production of Porgy and Bess, later appearing in the off-Broadway production Calypso Heat Wave (1957) and releasing her first album, Miss Calypso (1957).

A member of the Harlem Writers Guild and a civil rights activist, Angelou organised and starred in the musical revue Cabaret for Freedom as a benefit for the Southern Christian Leadership Conference, also serving as the SCLC’s northern coordinator.

In 1961, Angelou appeared in an off-Broadway production. Angelou went on to earn a Tony Award nomination for her role in the play Look Away (1973) and an Emmy Award nomination for her work on the television miniseries Roots (1977), among other honours. Angelou spent much of the 1960s abroad, living first in Egypt and then in Ghana, working as an editor and a freelance writer. Angelou also held a position at the University of Ghana for a time. In Ghana, she also joined a community of “Revolutionist Returnees” exploring pan-Africanism and became close with human rights activist and Black nationalist leader Malcolm X. In 1964, upon returning to the United States, Angelou helped Malcolm X set up the Organization of Afro-American Unity, which disbanded after his assassination the following year.

Angelou returned to California in 1966 and wrote Black, Blues, Black (aired 1968), a 10-part television series about the role of African culture in American life. As the writer of the movie drama, Georgia (1972), she became one of the first African American women to have a screenplay produced as a feature film. She also acted in such movies as Poetic Justice (1993) and How to Make an American Quilt (1995) and appeared in several television productions, including the miniseries Roots (1977). Angelou received a Tony Award nomination for her performance in Look Away (1973), despite the fact that the play closed on Broadway after only one performance. In 1998 she made her directorial debut with Down in the Delta (1998). The documentary Maya Angelou and Still I Rise (2016) depicts her life through interviews with Angelou and her intimates and admirers.

Angelou’s poetry, collected in such volumes as Just Give Me a Cool Drink of Water ’fore I Diiie (1971), And Still I Rise (1978), Now Sheba Sings the Song (1987), and I Shall Not Be Moved (1990), drew heavily on her personal history but employed the points of view of various personae. She also wrote a book of meditations, Wouldn’t Take Nothing for My Journey Now (1993), and children’s books that include My Painted House, My Friendly Chicken and Me (1994), Life Doesn’t Frighten Me (1998), and the Maya’s World series, which was published in 2004–05 and featured stories of children from various parts of the world. Angelou dispensed anecdote-laden advice to women in Letter to My Daughter (2008); her only biological child was male.

In 1981 Angelou, who was often referred to as “Dr. Angelou” despite her lack of a college education, became a professor of American studies at Wake Forest University, Winston-Salem, North Carolina. Among numerous honours was her invitation to compose and deliver a poem, “On the Pulse of Morning,” for the inauguration of U.S. Pres. Bill Clinton in 1993. She celebrated the 50th anniversary of the United Nations in the poem “A Brave and Startling Truth” (1995) and elegised Nelson Mandela in the poem “His Day Is Done” (2013), which was commissioned by the U.S. State Department and released in the wake of the South African leader’s death. In 2011 Angelou was awarded the Presidential Medal of Freedom.

After experiencing health issues for a number of years, Angelou died on May 28, 2014, at her home in Winston-Salem, North Carolina. The news of her passing spread quickly with many people taking to social media to mourn and remember Angelou. Singer Mary J. Blige and politician Cory Booker were among those who tweeted their favourite quotes by her in tribute.

President Barack Obama also issued a statement about Angelou, calling her “a brilliant writer, a fierce friend, and a truly phenomenal woman.” Angelou “had the ability to remind us that we are all God’s children; that we all have something to offer,” he wrote.