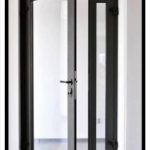 Doors are a phenomenal example of paradox. They stand as an inlet and outlet at the same time. There are doors that are opened to welcome everything and everyone that is destined to enter in; while there are doors which keep shut thier shine or dark in order not to let the world have a glimpse of it.
There are doors, with engravings carved on them as the bruises of the soul and body, which even without opening give an insight into what lies within. Then there are doors of wood and metal which stand against the vagaries of weather holding fast their position refusing to let go. The rusting and decaying in the process is inevitable due to the heat and moisture; just as the violence and sadness is inescapable and so is the damage caused by them to the human soul.
Doors are also of glass– shiny and transparent which are there for the namesake. They stand there beautifying the threshold and inviting inlet either through soft and careful openings or through rough and raging smashing which lays scattered the broken pieces of glass ready to hurt and pierce.
Then there are doors which are present and yet not there. You don’t happen to see them yet they stand in your way blocking the in and out. They pose the greatest threat– as they are invisible. You have no idea of their shape, size or colour; not even their built and texture. You stand clueless as you know not what next? How to approach the door? Open it or break it? All essence of physical presence go null and void there. Doors are elusive and being watchful is the key.