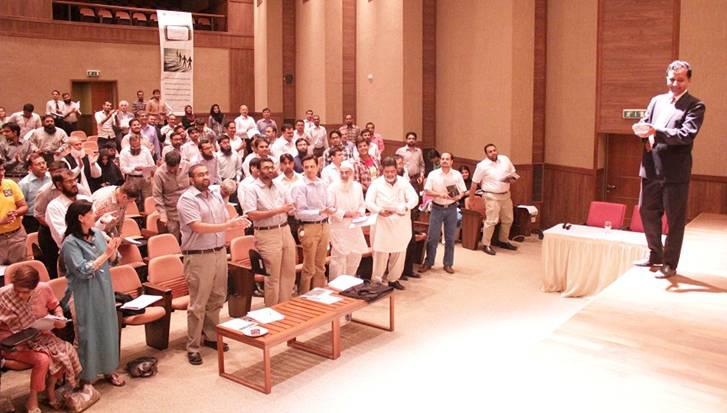 Journey to becoming better human being – 20 : My future changing my past

The words ‘Temporal Horizon’ continued to churn in my mind all through the week. I talked with some people about it. They told me that there are techniques to learn about mindfulness, meaning remaining in the present moment. Some one told me about a book named “Power of now” and a friend advised that all our problem arise from the fact that we are too much worried either about our past or the future and rarely remain in the present.

By now I had learnt not to get swayed by the fads of the society. I also knew that in our meetings there would be no discussion about any of these techniques or proposals as we do not know enough about them. It could be useless for some or could be useful for some and who we are to comment about the rightness or wrongness of their experience? What we can certainly focus is on our proposals and our understanding.

With that clarity I sought more understanding on the topic.

“This is time that appears in its true temporality—that is, where past, present, and future act simultaneously. “

I need to make sense out of this statement. Past, present and future act simultaneously. I see a currency note. Factually I see a piece of paper, but I recognise it as currency note as I had learnt in the past about the value of this paper. Would I tear it or throw it? If it was an ordinary piece of paper, perhaps I would have. But since it is a currency note I would not. What will happen if I get it or lose it? I understand now that all the three – memory of the past, perception of the present and imagination about the future – are working simultaneously in my mind without my realising it.

“It is a structure in which everything that has happened in your life acts simultaneously along with all that is taking place with you at the present moment and all that you imagine may happen to you as possibility, in the more or less foreseeable future.

Everything acting simultaneously!  A friend smiled at me. Apparently, a simple perception. But I remembered a past incidence and could see cunningness in his smile and decided to be careful with him else he may trouble me in the future. A simple smile but so many considerations! In this sense nothing is simple. Though appearing spontaneous, many considerations playing simultaneously.

“What do you want in the future is based on what has happened to you. Your projects of the future are driven by your experiences of the past.”

If in the past I had faced rejection, I would want recognition and I will be driven to things that would earn me recognition. Thus, by default the future projects arise out of the experiences of the past.

“But human being has intentionality and can create projects purely out of own intentions also.”

If I make a project to make difference to the world, that project may be arising out of my intentions and may or may not have any linkage with my pasts.

“What is most important is that your future affects your present and can even change your past.”

This was a startling statement. Past affecting future is understandable but how it can be other way round. Not that easy to understand. We started discussing how it could work.

A friend narrated his experience. He had an extremely troubled past as there was no money to eat at home and he had to start working at very young age continuing education at a distance. There was a time in his life when he saw his future as hopeless and regretted for his past. However, in recent times he has become more confident and is seeing bright future ahead. With this stance he is thankful of his past because of which he learnt to live through tough times and learnt to study on his own helped him to muster meaningful experiences.

Same past. When future appeared bleak, past was regrettable. When future is seen bright, the same past became a virtue.

“So if we have a brilliant project for the future, we will be thankful for everything that happened to us in the past and is happening to us in the present. What can be a better project than to work to Humanise the Earth.”

Realising the importance of self-less project in life that would make my past, present and future bright, I was moving ahead in my journey to become better person.