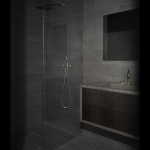 The dining room echoed with laughter. The occupants of the table’s chairs were as red as strawberries as they continued laughing on their stress buster’s jokes, the youngest member of their family, Ashu. Ashu was always as fresh as a daisy and could make you giggle in an instant. The family after a stomach aching laugh finally got up from the dining table breathless and marched towards their rooms. The tired family retired to beds in no time.

A piece of glass from a broken bottle glittered like a bright little star, and the black shadow of a dog or a wolf rolled past like a ball. It was communicating through twilight barks and the cats were mewing. The opened windows allowed fresh air to come into the room and made it arctic. The curtains fluttered. With a sudden jerk of the body, he woke and looked at the ceiling like a bat with button eyes set in the full moon of his face. He rose, his tiny body making a silhouette against the window like a sprinkle of paint on a canvas. He was sweating terribly and quaffed litres of saliva down his throat. Ashu had waken up. He lifted his hand to wake a bigger body, Meet lying beside him but hesitated as he was unwilling to get beaten up. He threw the blanket he was covered with and got down from the bed to wear his slippers. His legs were numb and he could not even move a muscle. He could hear his own heartbeat, he could even hear Meet’s relaxed breaths. He nervously moistened his dry lips. His footsteps echoed as he descended. They sounded like the banging of a drum, one lonely drum. His heart was pounding loudly. Sweat rolled down his face. As he advanced towards his destination, his eyes swelled with tears as he feared that he might bump into a deadly ghost anytime. He was panting and breathing heavily. When! There was a click! He heaved a sigh of relief. The cold air around him had drifted away replaced by the hot. His cheeks had turned rosy pink as if he had applied foundation on them and he stood contented. At last! He had emerged out victorious! He latched the bathroom’s door, the flush echoing inside and switched off it’s lights with a click. The little soul had displayed valour and should be conferred with a high award, he thought as he went to find his way back to his bedroom in the dark.

2 Comments on “The dark bathroom”