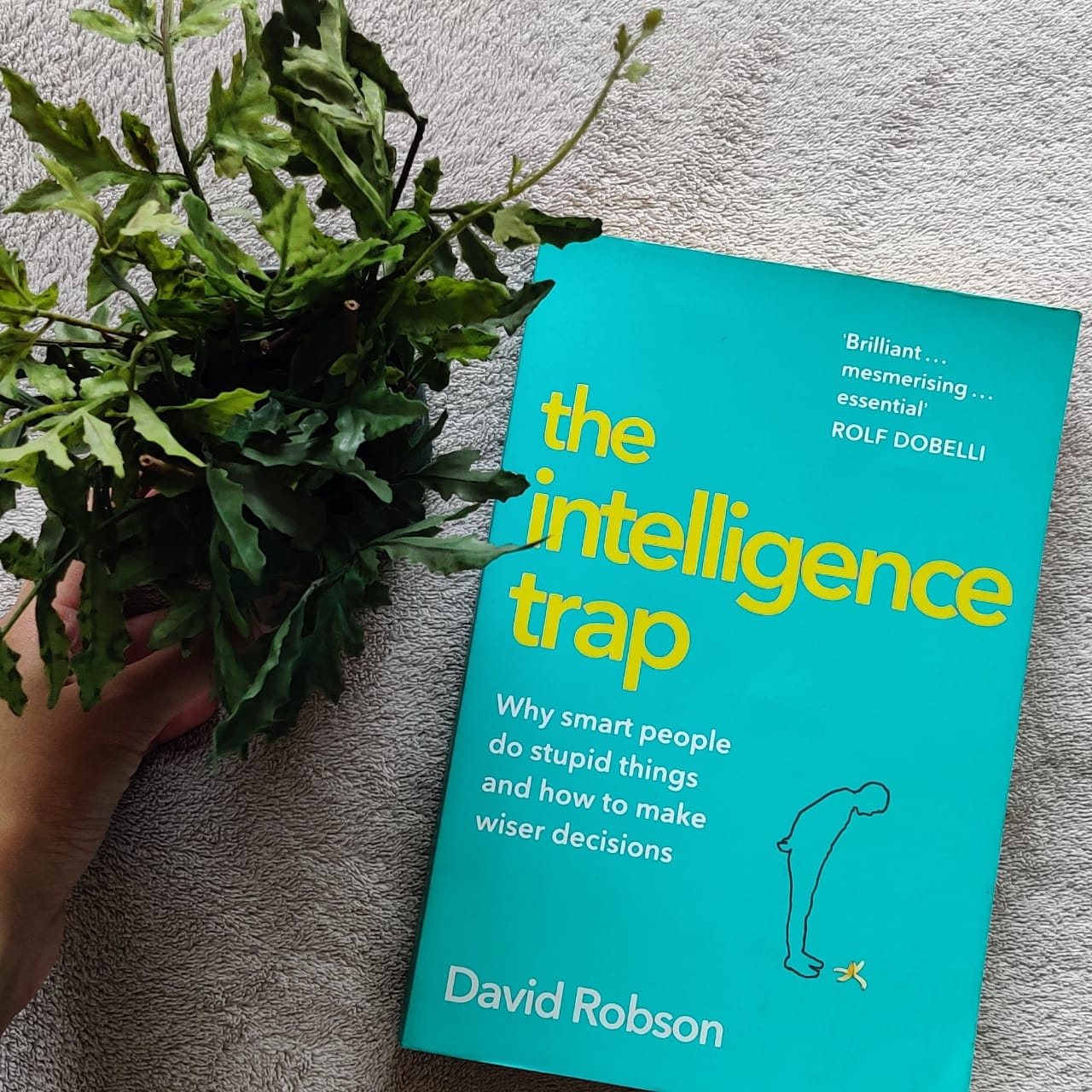 The Intelligence Trap explores cutting-edge ideas in our understanding of intelligence and expertise, including “strategic ignorance,” “meta-forgetfulness,” and “functional stupidity.” Robson reveals the surprising ways that even the brightest minds and most talented organisations can go wrong—from some of Thomas Edison’s worst ideas to failures at NASA, Nokia, and the FBI. And he offers practical advice to avoid mistakes based on the timeless lessons of Benjamin Franklin, Richard Feynman, and Daniel Kahneman.

In this primer on how to grow wise, David Robson provides an enlightening array of answers to three questions: “Why do smart people act stupidly? What skills and dispositions are they missing that can explain these mistakes? And how can we cultivate those qualities to protect us from those errors?”. Grounded in well-researched scientific studies, Robson synthesises concepts from history, sociology, biology, education, science, philosophy, and psychology, illustrates them with anecdotes about people who are famous, infamous, and, surprisingly often, just like us, and instructs us on how to be wiser than we are no matter what our intelligence. Robson shows us how luminaries such as Charles Darwin, Socrates, Steve Jobs, Richard Feynman, Linus Pauling, Albert Einstein, Benjamin Franklin, Thomas Edison, Houdini, and Arthur Conan Doyle either benefitted from or fell prey to their intelligence when it came to making dumb mistakes.

Part 1 begins with a discussion of the origins and evolution of intelligence testing. It explains how we came to value—then overvalue—academic tests based on our assumption that people are automatically better at evaluating factual evidence if they have heightened intelligence. One misconception, among many others that Robson notes, is how we admire people who act or react quickly and decisively rather than slowly because we associate the latter with their being stupid. Scientific studies, however, “suggest that general intelligence depends on the way our genes interact with the culture around us.”Robson reminds us that other kinds of intelligence—creative, practical, and emotional, for example—are as important to success as academic knowledge. He stresses the need for rationality—”Our capacity to make the optimal decisions needed to meet our goals, given the resources we have at hand, and to form beliefs based on evidence, logic and sound reasoning.” Additionally, he urges us to recognise our many “my-side” biases: the availability heuristic, confirmation bias, sunk cost fallacy, framing and intuitive judgment biases, using intelligence to dismiss evidence, and overconfidence in intelligence.

Part 2 contains Robson’s toolkit for building “practical wisdom” in schools, work, sports, marriage, medicine, and the military. He advises developing social, emotional, cultural, and innate intelligence skills and underscores how social reasoning helps us consider the perspectives of others. He describes how emotional intelligence is bolstered by humility, acceptance that there is much we do not know, recognising our limits, open-mindedness, and acknowledging our blind spots. Because problem-solving may make us anxious, Robson explains how a technique called self-distancing may reduce it and lead to success.

In the forefront of his toolkit are self-reflection strategies to help us recognise and shed biases and focus not simply on what, but how, we think. He examines the neurology of our “gut instinct” and the value of staying connected to emotions and “somatic markers” during decision making. He advises ongoing reframing and re-evaluation of problems to find the best solutions to them. Robson next looks at how to spot lies and misinformation, including fake news. He explains how it is carefully constructed to suck us in and how it plays to traits that make us gullible. Then he lays out what is needed to seek “truthiness.” Self-reflection is once again key. We can learn to weed out lies from truth by, among other strategies, evaluating credentials of so-called experts, carefully examining claims, noting our own assumptions, and scrutinising evidence.

Part 3 is replete with practical strategies to develop wisdom, especially the need for curiosity about the world and other people. We learn how self-curiosity promotes honest reflection and a growth rather than fixed mindset and how other curiosity generates interest in what makes people tick and the world go ’round. Robson endorses the concept of “playing with” rather than “working at” whatever task is at hand and makes the case for allowing ourselves to acknowledge confusion in order to improve memory and learning.

In Part 4, Robson focuses on how to make groups and organisations function more intelligently. He cautions against having team members compete against each other, explains how status conflicts can hinder collective intelligence, emphasises how our performance may be affected by group members, examines the role of hierarchies on success, and encourages hiring people with high social sensitivity. He ends this chapter by describing the dangers of functional stupidity, which allows our view of short term or narrow success to blind us to the greater good.

This book is not a quick fix to avoiding making dumb mistakes. It moves slowly, building its case. A smattering of well-constructed charts and an excellent “taxonomy of stupidity and wisdom” make the material more understandable and foster the book’s readability.