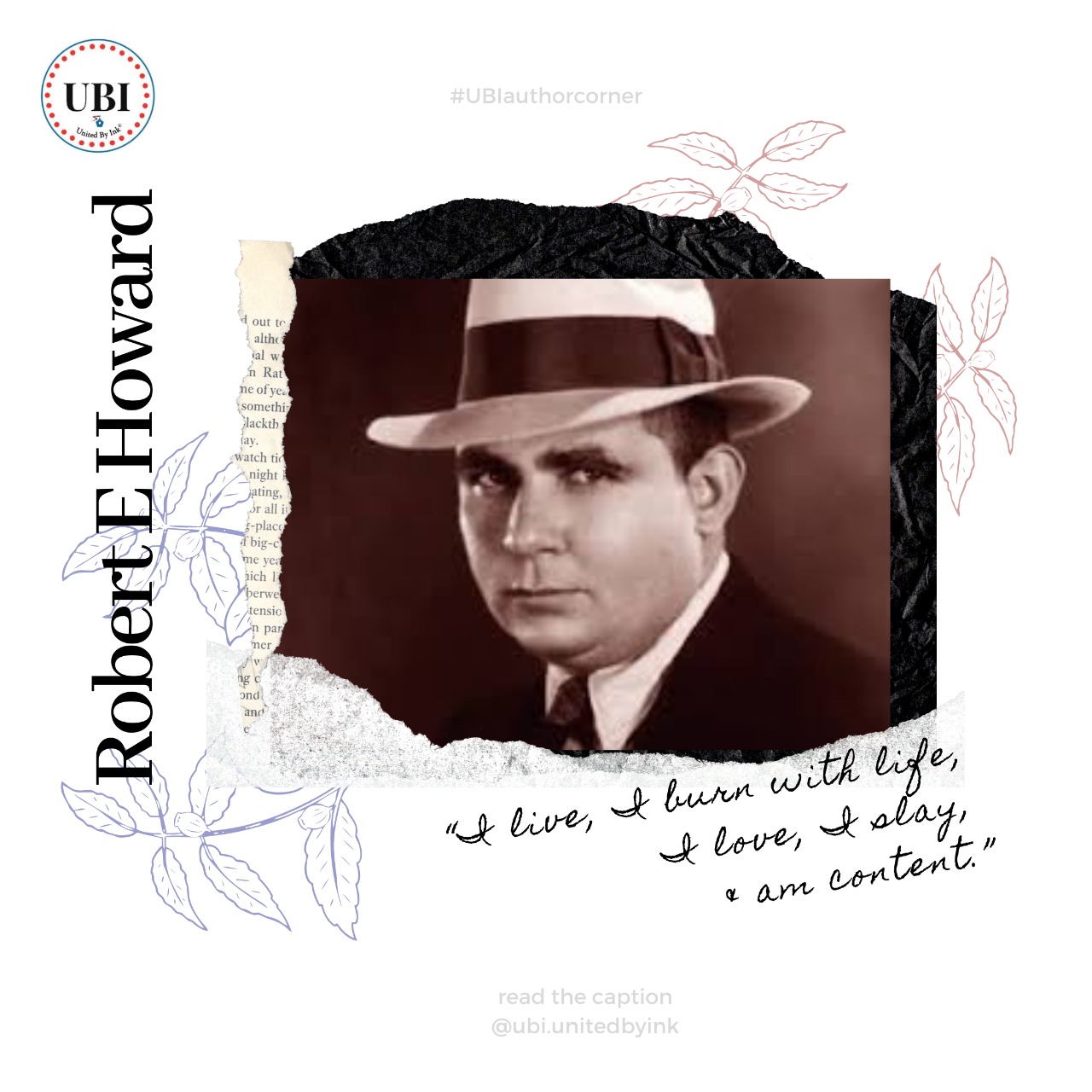 Robert Howard was an extraordinarily prolific and inventive writer of fiction and poetry during the 1920s and 1930s. Although best known as the creator of Conan, he wrote hundreds of poems and over three hundred works of fiction in a wide range of genres – about half of which were published during his tragically short career. He was an American pulp writer of fantasy, horror, historical adventure, boxing, western, and detective fiction. Howard wrote over three-hundred stories and seven-hundred poems of raw power and unbridled emotion and is especially noted for his memorable depictions of sombre universe of swashbuckling adventure and darkling horror.

He was the son of Dr. Isaac Mordecai Howard, one of the Southwest’s most prominent pioneer physicians, and Hester Jane Ervin Howard. As a child, he lived in at least nine towns across Texas until his father settled at Cross Plains in 1919. Robert steeped himself in the folklore and history of the southwest, but his interests were far broader than this, encompassing not just Texan, but history and anthropology, sports, erotica, and poetry. At fifteen, he began writing his tales of savage men living outside the rest of society, battling against other men, for land and pride. Though the circumstances and settings changed, the hero, or anti-hero, was always somehow a shade of the same creature – part savage, part nobleman, part poet, part pioneer – not unlike himself. He was a keen amateur boxer, participating in bouts at the local ice house. Between 1925 and 1928 had put himself through a weight and strength program, taking on really heroic proportions! He is described as an imposingly tall, dark, brawny man – with piercing blue eyes. His characters were as much himself as they were pulled from his extraordinary imagination.

Roberts mentor and friend, the legendary father of pulp fiction, H.P. Lovecraft, described him as “a lover of the simpler, older world of barbarian and pioneer days, when courage and strength took the place of subtlety and stratagem, and when a hardy, fearless race battled and bled, the real secret of his stories is that he himself is in every one of them…” There’s a scene in The Whole Wide World – the movie based on Novalyne Price’s One Who Walked Alone – that illustrates this quite neatly. REH and Novelyne go for a night ride and stop by a corn field with the headlights left on shining at the corn. They are sitting on the fenders chatting about writing, etc., and she says something like, “Tell me about this new Conan character of yours!” He hops off and faces her and the lights and says, “Conan is the damnedest bastard there ever was!” And as Robert tells her about Conan he becomes his character – and you can hear the swish and clang of swords in the background.

Robert also had a passion for oral storytelling – and often declaimed his stories as he typed them much to the annoyance of his neighbours. His prose is direct and vivid, with no literary pretentions, yet he was a skilled and dynamic storyteller. He created thrilling tales, in which violence is usually the hero’s best solution to any problem, and gold, jewels, and beautiful women his reward. His stories in the pulp magazines made him the most popular fiction writer in America from the late 1920s to the mid 1930s – he was probably the first author of serialized fiction to ever earn a living as a full-time writer. He was able, in a single month during the Great Depression, to earn as much as $500 – more than three times what the local bank president earned.

His writing career was at its height in 1936 when, after his tubercular mother fell into a coma, he committed suicide: he shot himself in the head and died eight hours later. There have been many speculations about his suicide being related to any mental health issues he might have been having at the time but it died down. His mother expired little over a day later. He is well known for having created — in the pages of the legendary Depression-era pulp magazine Weird Tales — the character Conan the Cimmerian, a.k.a. Conan the Barbarian, a literary icon whose pop-culture imprint can only be compared to such icons as Tarzan of the Apes, Count Dracula, Sherlock Holmes, and James Bond.