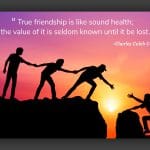 “True friendship is like sound health; the value of it is seldom known until it is lost.”

This well known staying reminisces a significant feeling in me especially so when I relate this to a group of friends living in a microcosm community. This community is not somewhere in India, but in a land far away where I feel the ‘NRIs are more Indianised than the people living in actual India.

The well-known Silicon Valley, located to the south of San Francisco, is predominantly inhabited by a congenial mix of the Chinese and the Indian populace. One of my friends  there was diagnosed with a cancerous tumour in the breast. Her chemotherapy sessions had to start soon in full swing as it was detected at an early stage luckily. She had a six year old daughter to take care of and sadly enough, her aged parents and in-laws back home in India, were in no position to travel so far across the globe. When her ‘knows’ and acquaintances came to know of this, they felt sorry for her state. Some of her so-called ‘good friends’ showed concern but shrugged away from their duty as friends in her time of need.. But then there were a few kind souls, who she considered as just neighbours rather than ‘close friends’. They voluntarily came forward as her saviours and as ‘God sent angels’ in her life. There they were, all planned and prepared to take care of her, support her and make her sail smoothly through this rough sea of life. One of them would drive her to the hospital for the scheduled chemo sessions, while the others would take turns to cook for her husband and daughter in addition to her healthful meals. Her husband was busy managing his job and housekeeping front. He could not afford to risk his job at any cost now. As most of the treatment was uninsured, he had to work double jobs in order to survive the credit based American life. In a land where domestic help is a rarity and is extraordinarily expensive, it was these friends who selflessly contributed their time and emotions to support her and her family in this dire situation..She was cured from the malignant cancer.

But her happy healthy state did not last long. Her cancerous cells relapsed after a year, but this time showed up as a tumour in the brain. And the terrible ordeal of the painful chemotherapy and radiations along with plenitude of medications, started yet again. The angels of her life came to her rescue yet again! They nobly boosted her morale and gave her strength in these strenuous times apart from all the other physical and laborious help.

With the blessings of the almighty, well wishes and hardwork of her friends and family, she recovered thoroughly. She found herself a new normal life and more importantly, she found a new family which was concealed in the name of her neighbours. These friends became her lifelines after her close encounter with a life threatening disease. This blessed friendship bond between them grew thicker and stronger with each passing year.

Unfortunately, after a gap of nine years, the notorious cancer cells visited her again in the brain and this time, the doctor prescribed a surgery as the last resort to remove the cancerous tumour. Her husband and her daughter, who was now in her teens, stood by her like a pillar of strength along with her life support system, which were none other than her angel friends. They were there to help her in all ways possible throughout her agonizing surgical procedure and recovery. Together, they again pulled her out of troubled waters until she was fit and fine.

Even after the treatment was over, she was advised to go for a few counseling sessions with a psychiatrist, which is kind of normal as most cancer patients tend to go into a state of depression as an aftermath. But with the positive happy interference of these friends in her daily routine , she never had to visit one.

Even though most of them have now moved out of that apartment complex and bought their own homes, they still meet habitually and still continue to be a vital part of each other’s life and existence.

One important thing I have clearly figured is that the beauty of  friendships and the value of real friends is established more on foreign soils, where your friends take the place of your family and make your lives full, rich and meaningful!